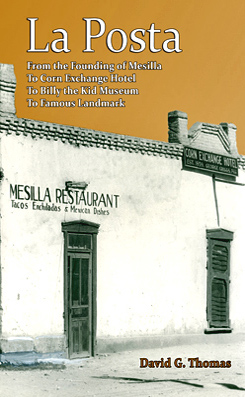 By David G. Thomas
The story of a building, its people, and its place.

The building sits on a lot next to the plaza. The lot is a “terreno de solar,” a grant to a Mexican citizen by the state of Chihuahua, Mexico, on which to build a house. By the terms of the grant, the grantee is obliged to own a horse and a gun. Within a year or so the grantee – and his lot – are no longer in Mexico – they are both in the United States.

A merchant buys the home, and opens a store. He sells to a partner, who opens Samuel Bean & Co. The Civil War begins and the town is occupied by Confederates. The Confederates are driven out by the Union. Bean is denounced as a “Johnny Reb,” and a U. S. Marshal confiscates his store. It is sold for almost nothing on the town plaza. After a fast series of buyers make quick profits, Lola Bennett buys it and builds her dream home. She trades it to John Davis, who establishes the most famous hotel in New Mexico Territory, the Corn Exchange. Davis dies. His widow runs the Corn Exchange as long as she is able. She dies and the church inherits it. The church sells it to the town priest. The priest sells to George Griggs, the impresario of the Billy the Kid Museum. Griggs sells to “Katy” Griggs for $1, who opens the most famous eating place in southern New Mexico – La Posta.

The Corn Exchange hosts guest from as far away as London and Hong Kong, and cities like San Francisco, Denver, Chicago, New York, and Washington D. C.

Ulysses Simpson Grant, Jr., son of the president, stays at the Exchange. As does John S. Chisum, “Cattle King of the West,” just two days after being robbed of $100 and a gold watch in a Silver City stage holdup.

Virtually all of the significant people in Billy the Kid’s life stay at the Exchange: Sheriff Harvey H. Whitehill, who arrests Billy for his first crime; “Doc” Scurlock, Charles Bowdre, and Richard Brewer, Billy’s best friends; Attorneys Albert J. Fountain and John D. Bail, who defend Billy in his trial for murder; William Rynerson, the District Attorney who relentlessly pursues Billy; Simon Newcomb, the prosecuting DA in Billy’s trial; and Judge Warren Bristol, who sentences Billy to “be hanged by the neck until his body be dead.” Even Billy’s implacable enemies James Dolan and John Riley stay at the Exchange.

Did Billy stay at the Exchange? Someone signed his name. Was it he?

Buenas noches boys,
A social call no doubt —
Do we talk it over,
Or do we shoot it out?

I’m Doc 45,
Toughest man alive.
Hand over those golden
bills
Or I’ll dose you up
with dirty leaden pills.